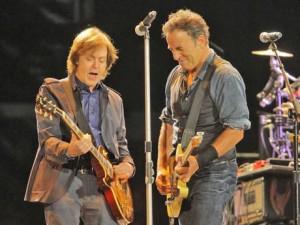 In yesterday’s Standard, Ministry of Sound’s James Palumbo decided to share his views about the Bruce Springsteen show in London on Saturday – specifically, the outcry after the promoters cut the mics while Springsteen and guest Paul McCartney were singing Twist & Shout.

And Mr Palumbo has decided to deliberately miss the point, in writing, for money. Not sure why – the Lib Dem-loving multi-millionaire can’t be that short of cash, can he?

But still. Rather than picking up on the general feeling about Saturday’s events – that it was a pity the end of a fine concert was curtailed – he sees it as a cultural battle. And he summarises his viewpoint like this:

“By cutting short Twist and Shout on Saturday night we lost nothing as a society. Absolutely nothing.”

This is not an especially helpful argument. You could, for instance, make the case that, were Mr Palumbo to be run over in the street, society would lose nothing. And you would be perfectly correct. But I’d still rather not see it happen.

Age seems to bother him, too – his article disparages “the middle-aged masses”, while one of the charges he raises against “ancient rockers” McCartney and Springsteen is that they “have lost all the sparkle of their youth”.

You can understand his strength of feeling. Mr Palumbo is a young, young man – 49 years of age – and has no time for the middle-aged in our society. And when he explains that he would have been furious if similar licensing issues had shut down an illegal dubstep rave or a drum and bass warehouse party, we feel for the Eton-educated former City-boy. He is down with the kids.

As an aside – in the immediate aftermath of the gig, when blame was flying in all directions, Boris Johnson decided to make it clear that this was not his fault. “It sounds to me like an excessively efficacious decision,” he said. “If they’d have called me, my answer would have been for them to jam in the name of the Lord!” Has anyone ever sounded so out-of touch? He’s like a baffled elderly maiden aunt. I swear he does it deliberately.

Whoever you consider ultimately responsible for the abrupt end to Saturday’s show – the promoters, the licensing bodies, or the wealthy local residents who insist on such strict licensing terms – the decision was another small battle between money and fun. And for 70,000 Londoners – along with a couple of flat-out no-argument rock’n’roll legends – money won. Again.

Meanwhile, in Dublin last night, Springsteen walked out on stage, said “Before we were so rudely interrupted…”, played the final seconds of Twist and Shout, and then followed up with I Fought the Law. Class.

One reply on “Bruce Springsteen and Paul McCartney in Hyde Park”