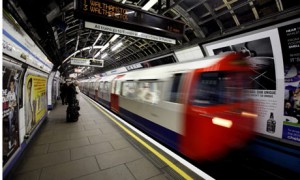 I saw something fascinating today. I was sat on a train beside a Japanese woman. She had an ingenious little computer in her hand, just a touch bigger than a credit card, which seemed to be translating words and phrases for her. She looked at the tube door – then down again at her device – pressed a few buttons – waited – and sighed. The sigh, I assumed, was of exasperation; her computer had failed her. She pulled a small notebook from her pocket, and began to write down the phrase, carefully, checking each letter before she wrote down the next.

Penalty fare, she wrote, with freshly sharpened pencil, or prosecution.

There were several phrases already in the book, presumably marking other occasions when her translator’s dictionary had let her down. Reading down the page, I saw:

thank you for not smoking

My response to this surprised me. Because I was embarrassed. It was as if she had, entirely accidentally, hit on a method for summing up my city, my country, the English-speaking world, in a few neat phrases – and had chosen sneers, rules and threats. You failed, you can’t, and here’s what will happen if you do.

Poems on the Underground celebrates its 25th anniversary this year. Those of you who live outside London might be surprised to learn that, thanks to this arts programme, our tube carriages are decorated, alongside the maps, ads, warnings and graffiti, with poetry. A little uninvited, unexpected art brought into our day. It’s one of those projects I am glad exists, although I have no idea why I feel that way.

Well, today, this was my Poem on the Underground, and maybe it only bothered me because it made a point that I a) didn’t like, but b) couldn’t disagree with.

Or maybe it was just a few random and understandably baffling phrases written down by someone learning to speak English.

Here it is again. I’ll let you decide.