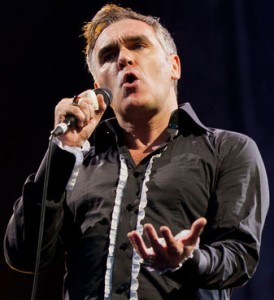 While I watched the BBC’s fine coverage of Glastonbury this evening on iPlayer, Robin Ince tweeted this, direct from the muddy field:

A short while later, as I was watching Moz’s band beat seven shades out of a once-fine Smiths song, I could see what he meant. Morrissey had, as is his way, cast himself as the downtrodden victim – in this case, of poor scheduling, as he felt certain the audience were all simply killing time waiting for U2, and had no interest in him. Had this been true, would they have been able to sing along word perfect to “There Is a Light…” and “Everyday Is Like Sunday”? Nope. But Morrissey had decided that he wasn’t wanted, and it showed in his performance. It wasn’t especially endearing.

As the broadcasts continued, Bono, by contrast, looked as if he couldn’t believe his luck to be playing at Glastonbury. Biffy Clyro, and Chase and Status, gave their sets all the energy they could muster. And Jimmy Cliff seemed to be having the time of his life.

I’m hardly a dedicated fan of any of them – certainly nothing compared to the devotion I’ve shown Morrissey over the years – but, to pick just one example, Jimmy Cliff’s joy in singing “I Can See Clearly Now” was more compelling than anything Moz had managed. And it was all, it seemed to me, in the attitude.

You don’t have to be a cheerleader, of course. Nor do you need to pledge your love to the audience every five minutes. But if you can’t convey to a crowd gathered to see you that right now, this moment, there’s nothing more important for you to do – that there’s nowhere you’d rather be – then why are you there? And why would you expect anyone to want to watch?