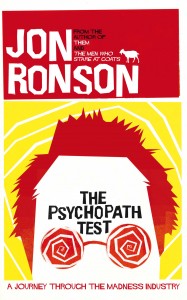 Just read Jon Ronson’s book The Psychopath Test, and I enjoyed it enormously. At its core is a quiz – not so very different from those ‘Are You a Real Man?’ articles you see in magazines – except this is more ‘Are You a Dangerous Nutter?’ Though, of course, it is more sensitively titled. It’s called the Hare Psychopathy Checklist.

Twenty questions. That’s all. You don’t get to answer them yourselves, mind – a trained counselor interviews you, and marks you accordingly – 0 if a trait on the list doesn’t apply, 1 if you show mild signs, and 2 if you show strong signs. Score over 30 and you’re a psychopath. The end. No further discussion.

(In fact, the question of whether there really is no room for discussion is a major theme of the book. But all the same – score 30 and above, and you’ll probably never be allowed out again.)

The thing is, a number of the traits on the list seem quite, well, everyday. I’ve definitely got a few of them – that I’d admit to – and maybe a few that I wouldn’t. No one, for instance, can fault me when it comes to criminal versatility.

And there are others which, while not defining my personality, do show up from time to time. I may not live my life with a grandiose estimation of self – far from it most of the time – but I am, nevertheless, a stand-up comedian. Draw your own conclusions there.

And doesn’t the skill of the comic rely, to some degree, on manipulativeness? Lying? Superficial charm? And I’m not even going to start on ‘lack of realistic long-term goals’…

I don’t think I’m a psychopath – I really don’t – I’ve always felt that my flaws fall into the neurotic, rather than psychotic, camp. But it was beginning to bother me. After all, I would imagine that most of the people in Broadmoor would argue that they were not psychopaths – even if they did eat those people. They were just peckish.

Which is why I’m very grateful to Martha Stout, from the Harvard Medical School, who about halfway through the book says this:

“If you’re beginning to feel worried that you may be a psychopath, if you recognise some of those traits in yourself, if you’re feeling a creeping anxiety about it, that means you are not one.”

Well thank God for that…